Video of the Month: Introducing LexShare

LexShare is a cloud-based service that allows users to share files with your clients and request signatures from them over email, as well as import the signed documents back into the PracticeMaster Document Management file. LexShare’s features are designed with security at its core, which is essential for keeping client information confidential and for staying compliant.

LexShare Integration is available in PracticeMaster Version 2022 (Build 22.2.7) and later.

Training Videos can be accessed at Tabs3.com/videos. You can also access the videos in the Quick Launch by searching for and selecting “Training Videos.”

Platinum: Auto-Recovery is Peace of Mind

Network and hardware failure can cause data corruption in any firm, regardless of preventative measures. Auto-Recovery helps provide peace of mind when faced with these issues.

For example, if you are updating statements and you lose network connectivity in the middle of the update, without Platinum you would have to restore your data and potentially lose many hours of work. Not so with Auto-Recovery! Auto-Recovery monitors the software. When it recognizes a transaction has not completed properly, it rolls back the database to its previous state before the database transaction began.

This is a powerful feature that can save your firm time and money. Power failures, computer crashes, and network failures can occur on even the best networks. Auto-Recovery helps greatly reduce the impact of these issues.

For more information about Platinum features, see Knowledge Base Article R11379, “Platinum Overview.” If you have any questions regarding Platinum features, contact your local consultant, or call Technical Support at (402) 419-2210.

We want to add an extra layer of security to our financial information in General Ledger. Users are already restricted from accessing General Ledger, but is there a way to protect the PDF files created for our reconciliation reports so only authorized users can open them?

General Ledger provides the ability to apply password protection to the reconciliation report PDF files to help keep the firm’s financial information protected both inside and outside the software.

Future reconciliation reports will now require a password to be entered in order to open.

Did you know that Tabs3 Connect takes advantage of existing security features for Tabs3 Billing and PracticeMaster? Not only does user access to Tabs3 Software data follow the same rules regardless of how you are accessing it, Tabs3 Connect provides even more control!

For an added level of control, you can monitor who is accessing Tabs3 Connect. The Tabs3 Connect Access Log tracks the following information:

Do you want to keep track of who is logging in and out of Tabs3 Connect, who is getting locked out due to failed login attempts, or who is downloading documents and attachments? The Tabs3 Connect Access Log in System Configuration (View | Log Files | Tabs3 Connect Access Log) contains all of this information! Each Log In, Log Out, Lock Out, and Download entry contains the date and time of the logged item, the User ID of the user who performed the action, and the IP address of the device where the action was performed. Additionally, the download path for documents and attachments is included.

For more information on these features, as well as more security features, see Knowledge Base Article R11717, “Security Resources.”

Do you have Access Profiles set up? Access Profiles help with security by controlling what functions each user can access in the software. The Access Profiles training video walks you through creating a new access profile that limits a user to certain Tabs3 Billing functions. Once you know the basics of setting up one Access Profile, you can set up the profiles you need for your firm.

Training Videos can be accessed at Tabs3.com/videos. You can also access the videos while in the software by selecting Help | Training Videos.

Making sure your data is secure is top priority. To help you with this, we have a resource that has everything you need in one place. Knowledge Base Article R11717, “Security Resources,” provides a list of articles related to security broken down into the following categories:

In this article, you can find links to information regarding user rights in the Tabs3 software, maintaining ethical walls in the software, using Platinum data encryption, emailing Tabs3 statements, Windows security warnings, and much more.

To assign timekeepers via System Configuration

For information on how this setting affects the Tabs3 and PracticeMaster software, Knowledge Base Article R11328, “Assigning Tabs3/PracticeMaster Timekeepers,” explains how assigning timekeepers works, provides a list of reports and tasks that are affected by this setting, and explains exactly how they will be affected.

Tabs3 Connect: View Your Data Away From the Office – Securely

Tabs3 Connect allows you to work away from the office, while your data stays at the office. We know your data contains sensitive information, and we designed Tabs3 Connect with your security in mind. Tabs3 Connect is an internet-based application that accesses the data on your server at your office, and displays it on your device via an easy-to-use interface. Your clients’ data is not stored in the cloud, nor on the device you use to access Tabs3 Connect, nor on Tabs3Connect.com, nor on a third-party server.

For more information on Tabs3 Connect, contact your reseller and consultant, contact Technical Support at (402) 419-2210, or visit Knowledge Base Article R11480, “All About Tabs3 Connect.”

Video of the Month: Working with Secure Clients

Keeping clients secure in a law firm is part of maintaining ethical walls. Some clients may require that only certain users have access to reports and statements for the client. The Working with Secure Clients video walks you through setting up a secure client and explains how to also keep contact information secure by storing it in the client file only. 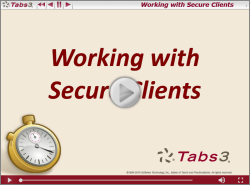 Training Videos can be accessed 24 hours a day, 7 days a week, at Tabs3.com/videos. You can also access Training Videos while in the software by selecting Help | Documentation and then clicking the See also link for Tabs3 and PracticeMaster Training Videos.

Do you want to take advantage of all the features of Platinum, while also taking full advantage of your server’s memory? If you have a 64-bit server, such as Windows Server 2012, you can improve the performance of accelerated reports and filtering with Platinum SQL! The standard multi-user and Platinum versions of Tabs3 and PracticeMaster are 32-bit programs. That means they can only allocate 2GB of available memory, regardless of whether they run on a 32-bit or 64-bit operating system. The Platinum SQL software can be configured to allocate additional memory beyond the 2GB limit for caching, and larger firms will often require more than 2GB of memory allocation to cache their commonly used data and index files. Since Platinum SQL is a 64-bit program, it can access memory on the 64-bit server beyond the 2GB limit, which means it can cache more of your data, thus improving the performance of accelerated reports and filtering! Utilities for monitoring server usage and performance are included with the software, allowing you to determine the effectiveness of your cache settings.

Platinum SQL also includes the Platinum SQL Server, which maintains a set of SQL tables linked to your Tabs3 and PracticeMaster data. To allow access to these SQL tables, Platinum SQL includes 32-bit and 64-bit SQL ODBC drivers, which allow you to write custom reports in both 64-bit and 32-bit programs (e.g., Crystal Reports and Microsoft Excel 2010 64-bit Edition) as well as OLE DB compatible software (e.g., Microsoft SQL Server) using SQL queries. Furthermore, these queries are processed directly at the server, which improves performance and reduces network traffic. Not only is the SQL ODBC driver included in the Platinum SQL package, but you also receive a firm-wide license for it! This allows multiple users to access SQL ODBC without having to purchase additional licenses. Manager-level SQL access rights can be assigned for each system in System Configuration, allowing you to grant SQL access to only those who need it.

With faster speeds, data encryption, enhanced ODBC capabilities, and the added ability to run SQL queries, Platinum SQL is the ideal solution for any firm that wants to enhance their performance, security, and/or take customized reporting to the next level.

Modern technology allows criminals to create forged cashier’s checks that are virtually indistinguishable from legitimate cashier’s checks. As a result, it may take a surprisingly long number of days, even weeks, to catch the forgery. But even when it is uncovered, the victim will still be in the same pickle, since financial institutions will take the position that the person who deposited the check with them is responsible and will charge it back against the depositor’s bank account. This can be devastating, particularly if the account is a law firm trust account.

To help make sure that you or others in your law firm do not fall prey to such devastating consequences, watch the webinar recording to learn more about what to look for in a legitimate check and how to make sure your checks have enough security features to ensure you’re protected against check fraud.

Tabs3 Connect has been around for some time now, but what exactly is Tabs3 Connect, and what can it do for your firm? Tabs3 Connect is a Platinum feature that provides access to Tabs3 and PracticeMaster anywhere you can connect to the Internet. No apps to download, simply go to Tabs3Connect.com and log in using your phone, tablet, laptop, or other internet-enabled device. Access client and contact information, enter fees and costs, use Matter Manager, access your firm’s calendar, receive alarm notifications, send and receive eNotes, and download documents and e-mail attachments via Tabs3 Connect. On smartphones and tablets, you can tap to create a fee, and flick to scroll through a list.

If you already have Platinum, take advantage of this great feature and change the way your firm works! Don’t have Platinum yet? Now is a great time to explore the possibilities.

Video of the Month: Introducing LexShare